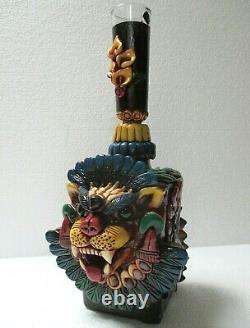 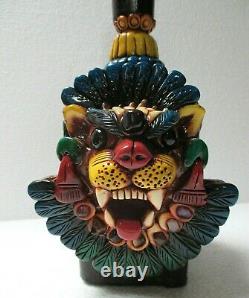 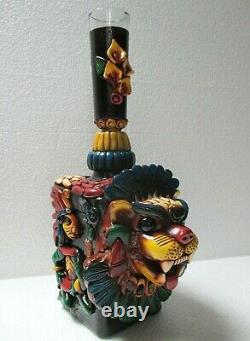 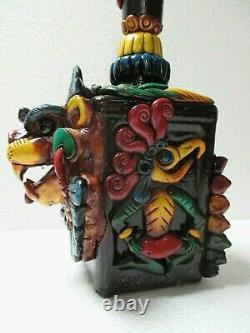 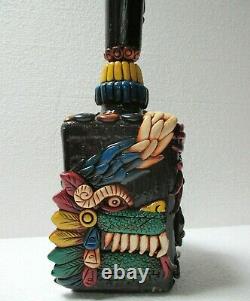 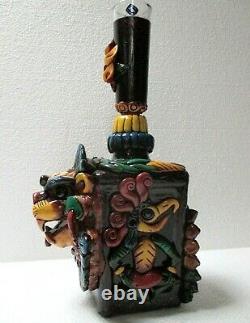 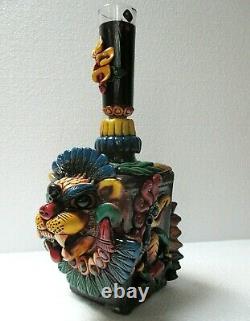 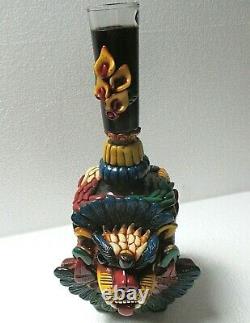 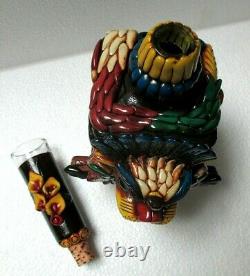 This beautiful art piece comes from the region of Teotihuacan, Mexico. The artists of Teotihuacan are very talented and work with various mediums such a clay, resin, glass, stone and minerals and their art pieces can take their form in sculpture, pottery, burial masks and murals. Their art can range from highly stylized to minimalist. The art forms are often of deities, monuments of the Teotihuacan culture, or pieces representative of the Aztec culture which influenced the region. Black obsidian is the most significant stone/glass used in their art, yet sculptures and masks are also embellished with a variety of quartz, jade, basalt, greenstone, andesite, and shell that are highly polished, with particular detail found in the eyes.

This tequila bottle and shot glass have amazing clay and stone embellishments all around with its jaguar face, obsidian stone eyes, quartz stone collar, Aztec gods on the side and feathered serpent on the back. Truly amazing and representative of this ancient city's culture.

The bottle measures 12 1/2 x 5 1/2 x 6 1/4. The shot glass is 4 1/4 x 1 1/2. Teotihuacan (where this piece is from) was a pre-Columbian Mesoamerican city located in a sub valley of the Valley of Mexico, located in the State of Mexico. Although it is a subject of debate whether Teotihuacan was the center of a state empire, its influence throughout Mesoamerica is well documented. It is still a mystery as to who built this amazing city.

It was built by hand more than a thousand years before the swooping arrival of the Nahuatl-speaking Aztec in central Mexico. But it was the Aztec, descending on the abandoned site, no doubt falling awestruck by what they saw, who gave it a name: Teotihuacan.

Reached its zenith between 100 B. 650 and supported a population of a hundred thousand.

No matter its principal builders, scholars and evidence suggest that Te. Otihuacan hosted a patchwork of cultures including the Maya, Mixtec, and Zapotec.

One theory says an erupting volcano forced a wave of immigrants into the Teotihuacan. Valley and that those refugees either built or bolstered the city. The city and the archaeological site are located in what is now the San Juan Teotihuacan municipality in the State of Mexico approximately 25 miles northeast of Mexico City.

The site covers a total surface area of 32 square miles and was designated a UNESCO World Heritage Site in 1987. It is known today as the site of many of the most architecturally significant Mesoamerican pyramids built in the pre-Columbian America, including the Pyramid of the Sun. The item "Mexican Aztec Folk Art Teotihuacan Obsidian Stone Tequila Bottle Shot Glass 13" is in sale since Tuesday, February 16, 2021. This item is in the category "Collectibles\Cultures & Ethnicities\Latin American\Mexico\Folk Art". The seller is "tradewindsfolkart" and is located in Port Isabel, Texas. This item can be shipped to United States, Canada.